In May 2015, Tsinghua Unigroup reached an agreement with HPE to obtain a controlling 51-percent stake in New H3C. That result was achieved a year later, with a 51-percent stake controlled by Unigroup and the rest by Hewlett Packard Enterprises.

Yu Yingtao, CEO and president of the new H3C, believed that challenges from technical reform has made everything without a sizable scale risky. The company promises to be a new force in the future IT infrastructure market. 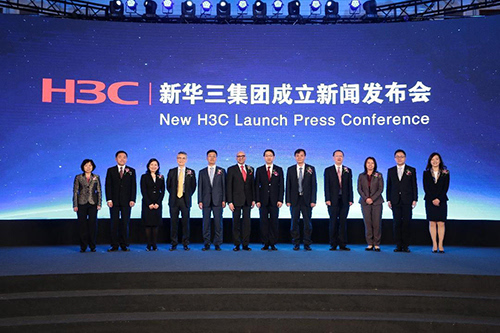 According to IDC data, H3C produced 31.52 percent of Chinese routers in the enterprise network market and 27.84 percent of switches in 2015, the fourth consecutive year it has been among the top four producers. The new H3C has rolled out high-end 16-bit and 32-bit routers. Except in the core operator router market the new company is neck and neck with Huawei, a leading global information and communications technology (ICT) solutions provider. Yu revealed that the new H3C will focus on the operators’ market in future.

In the global market, CISCO is still firmly in first spot in the field of enterprise networks. But the new H3C will exhibit a more comprehensive capacity since it can rely on the original H3C's independent innovation capacity, domestic service experience and technical edges in cloud computing and networks. At the same time, HPE also has experience in high-end storage and server technology, marketing and distribution channels. With Unigroup's advantages in talent, education, funding and social resources and its ability to develop a whole industry chain, the new H3C will achieve more in the global market.

Technology: leading advantages stand out and get a head start

The new H3C has an obvious edge in the traditional IT chain. It has more than 8,000 channel partners and is controlled by a State-owned company. These favorable factors ensure that the new company can sustain its expansion in the enterprise network market.

The new company has undertaken ten cloud computing programs for political affairs at ministerial level across the nation, 15 at provincial level and more than 100 at prefectural level. More governments have expressed interests in cooperation with the company to move government work to the cloud end and accelerate their transformation into service-oriented governments. The new H3C has released its cloud-sharing strategy to help users realize common sharing from exclusive sharing.

The new H3C recently delivered the biggest domestic SDN network to taobao.com. The network employs eight core routers, 88 aggregation routers and more than 700 switches and supports more than 20,000 physical servers and 400,000 virtual servers. On May 3, the company became the leading candidate to win the bid to provide an SDN network to China Mobile’s R&D center in Suzhou. The SDN involves more than 50 million yuan.

H3C has provided Tencent with a giant SDN network, with more than ten controllers. The network is the biggest of its kind in China.

The company has accumulated a great deal of experience through BAT service. Yu hopes it will be applied to operators, government and financial institutions, which ask for a higher level of safety and maturity, by which means the new H3C will be able to expand its enterprise network advantages.

In addition, the company has an ace at its disposal, a data center with a research team of more than 200 members. The institute’s predecessor was HP’s data research center in Tianjin. The world-class center can provide a full set of top-tier data center designs, which gives the new H3C an exclusive edge in this regard.

Yu said that the new H3C’s future market strategy is to focus on markets where it’s competitive and to track developments in new fields.

The new H3C will adopt a dual brand (H3C and HPE) strategy to serve various types of customers. The H3C brand will serve industries and big enterprises important to national security and economic lifelines, including banks, governments, public security offices, financial securities companies and operators, as well as those with completely independent intellectual property rights. The HPE brand will focus more on small and medium-sized enterprises, including foreign banks, multinational corporations and private enterprises, so that customers can choose world-class IT solutions and products at the same time.

In the global market, the new H3C will continue to use the HPE brand and channels to expand. In the first quarter, H3C communication exports surged 82 percent, which was an achievement of the model featuring H3C products and HPE channels. It has become a classic case of technology and channels working together.

As a channel founder for consumer electronics operators, Yu did not give up on the consumer market. He feels that the new H3C should make use of its industry-grade technology spillover and make inroads in the derivative consumer market. For example, it could stand out in the high-end home WiFi market, which is being flooded by products that cost roughly 100 yuan and offer undesirable signal penetration and security.

Yu believed that the new H3C will have to quickly seize opportunity in the future, when 5G, 2B and 2C markets converge. He has therefore set up an ad hoc team to track and research those hotspots well in advance.