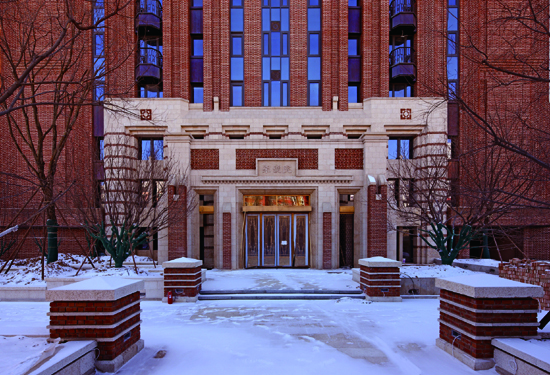 The overall planning of Diaoyutai No 7 Yard in Beijing echoes the unique natural landscape at the north bank of Yuyuantan Lake. A total of 100 apartments extend along the lake, taking advantage of the location's characteristics.

The project's design strives to create a new but classic tradition by inheriting the local culture and traditions.

The design did not have any style on purpose; instead, it simply yet exquisitely arranged the architectural elements from west and east.

A total of 1 million red bricks made by a traditional technique were used in the construction, with modern laying methods. The building's parts accessible to or used by people, such as handrails and balconies, were dotted by raw cooper, which will have traces of human activity as time goes on. The stone materials of primitive simplicity together with the dignified red walls create a simple and unsophisticated atmosphere.

The project won the 2009 Overall Design and Planning Award in the National Habitat Classic Architectural Planning and Design Competition.