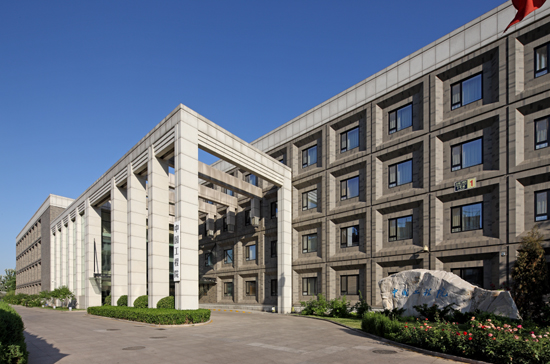 The comprehensive office building of the Chinese Academy of Engineering is close to Beijing's former city gate, Deshengmen (Gate of Virtuous Triumph). The Archery Tower, a structure of Deshengmen, has great cultural relic value.

In order to protect the cultural relic's existing environment, the office building's design successfully illustrates its original intention: to make the new building the best support for the relic, by controlling the new building's size, materials and color as well as details such as its windows and doors.

It is an effective practice to build a new building in the historical relic conservation section. The building uses a large area of curved glass curtain walls from where people inside could admire the view of Deshengmen. It is a kind of view-borrowing technique in traditional Chinese architecture.

The new building is designed in a simple and plain style, meanwhile reflects its status as part of the top academic organization in China. It has won engineering awards at the municipal and national levels.