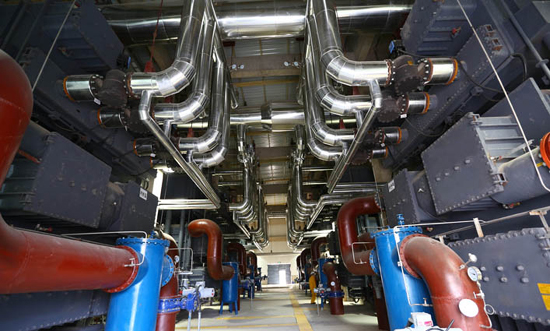 In order to meet new heating demands, Cangzhou Huarun Thermal Power Plant has allocated eight Tongfang Kawasaki 30.5MW steam absorption heat-pump units to recycle the afterheat of the cooling tower’s circulating water. The project is able to supply heat for an area of 5 million square meters. Moreover, it cuts standard coal consumption by nearly 50,000 tons and saves cost of 42 million yuan per year. The emission of carbon dioxide is reduced by 120,000 tons every year; the figure for sulfur dioxide emission is 380 tons, and 330 tons for oxynitride. A total of 700,000 tons of water is saved every year.

Meanwhile, by using the Tongfang Kawasaki absorption water chillers to recycle the plant’s afterheat, the plant refrigerates a construction area of 84,000 square meters.

This energy-saving project won recognition and support from the National Development and Reform Commission. It then received loan from the Asian Development Bank on the approval of the Commission and became the first of its kind in China.