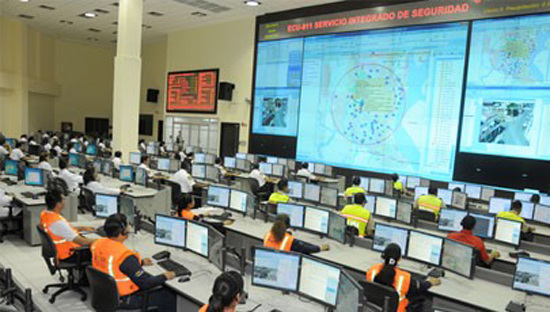 ECU911- Ecuador urban security command and control system project - consists of two national command-control centers, seven at regional level and 16 provincial ones, as well as 21 sub-systems. The system, integrating functions from rapid reception, rapid dispatch response to intelligent analysis and video monitoring, provides public security services basically throughout Ecuador. A population of 14 million in the country are benefiting from this security system.

ECU911 system integrates the resources of seven functional authorities, including police, transportation, fire prevention, medical care, risk control, municipal management and army, to achieve inter-departmental and inter-regional coordination. In Ecuador, the public can ask for help by calling 911, no matter whether there is a human accident or a natural disaster.

Since the first command-control center went into operation, the system has handled over 34 million emergency accidents, 8,000 lives were rescued. Ecuador, which has been denounced for poor public security before 2010, has its public security rating improved from 16th to 4th place among the Latin America in 2014, when the statistics showed the country's crime rate cut by 24 percent.