Tsinghua Holdings' top 10 share their expertise with the world

It only took two days for Li Yuan to make the decision to take up the project of developing the first 911-like system for the Republic of Ecuador.

The project is known as ECU911, including two response networks in Ecuador: one is for major emergency incidents such as earthquakes, storms and nuclear disasters. The other is the receive-disposal alarm system concerning social safety, fire, traffic incidents and medical services.

Li's team completed the technical part of ECU911 in early 2011. The first national control center was built within eight months in Guayaquil, followed by another 15 provincial and regional centers.

People's Daily reported that till the end of 2014, the ECU911 had responded to 3.4 million emergencies and saved more than 8,000 lives. Thanks to the system, the response time from receipt to disposal has decreased from 2 hours to five to 10 minutes.

Li told China Daily that their team didn't take it as a task assigned by the company, but a career with important social value into which they are willing to put continuous effort.

"Many of us have worked at the control center in Ecuador. We saw our system save lives," Li said. "I think our work is of great value. What we gain is more than economic payback."

Li said the whole project will be completed at the end of 2017 and will be handed over to the local authority after a five-year maintenance period for each control center. "But this is not the end. We will continue to improve the current system if any problem is found," he said.

Li also said that similar cooperations with Venezuela and Bolivia are underway.

He said the spirit of innovation has become part of the company's culture. "Innovation is rooted in small things," he said. "For example, we are always thinking of ways to improve efficiency."

Li has been listed as one of the top-10 innovative professionals in the industrial parks of Tsinghua Holdings, held from May to August. The result came from online voting and the opinions of an expert panel.

"The campaign aims to encourage innovation of grassroots workers, improve the innovative atmosphere and answer the call of the nation's innovation-driven development strategy," said Zhou Liye, president of Tsinghua Holdings.

"The top 10 all have a strong innovative spirit and have achieved great benefits for society and their field," Zhou said.

Zhang Li, who won the highest score in the selection, is a doctoral adviser at Tsinghua University and the general manager of the security CT division of Nuctech.

"As a university researcher, I can keep up with the frontiers of technology, and working at the company, I can learn the demands of customers, which helps us make products that better serve the market," she said.

One of her major topics of research is the CT liquid security inspection system that can be used at airports to detect dangerous liquids.

"Tsinghua University provides many opportunities for academic and technological exchange. Nuctech has also emphasized innovation since the day it was founded," she said. "It is an honor to work for the university and the company at the same time."

Now more than 500 sets of the device have been sold to the global market, including about 10 European countries, with total sales of about 200 million yuan ($29.8 million), Zhang said.

Another winner from Nuctech, Liu Yaohong, as the executive deputy president of the company's United Research Institute, invented the world's first relocatable container/vehicle inspection system. The device helped to detect two tons of drugs hidden in containers of coffee beans in Amsterdam, the Netherlands, in early 2007.

"Most of the inspection systems cannot find drugs hidden in coffee beans because the densities of the two are similar, but our devices can tell the difference in ingredients and identify them by different colors on the computer," Liu said.

Now the device has been sold to more than 140 countries and regions, taking a 31 percent share in the global market. Liu said total sales have reached 1,000 units for a total of approximately 10 billion yuan.

As for the atmosphere of innovation, Liu said the company had a clear division of labor and invested heavily in scientific research. "The company invests 200 million yuan a year in technological research," he said. "Employees can put forward their new ideas to the technological committee. If passed, they can become real projects."

According to the president of Tsinghua Holdings, Zhou Liye, the group is dedicated to the industrialization of technical achievements, and to helping high-tech startups grow, based on the scientific strength and human resources of Tsinghua University.

"Giving the professionals our respect and encouraging them to develop their own ideas by improving management systems are the keys to the development of the whole enterprise," Zhou said. 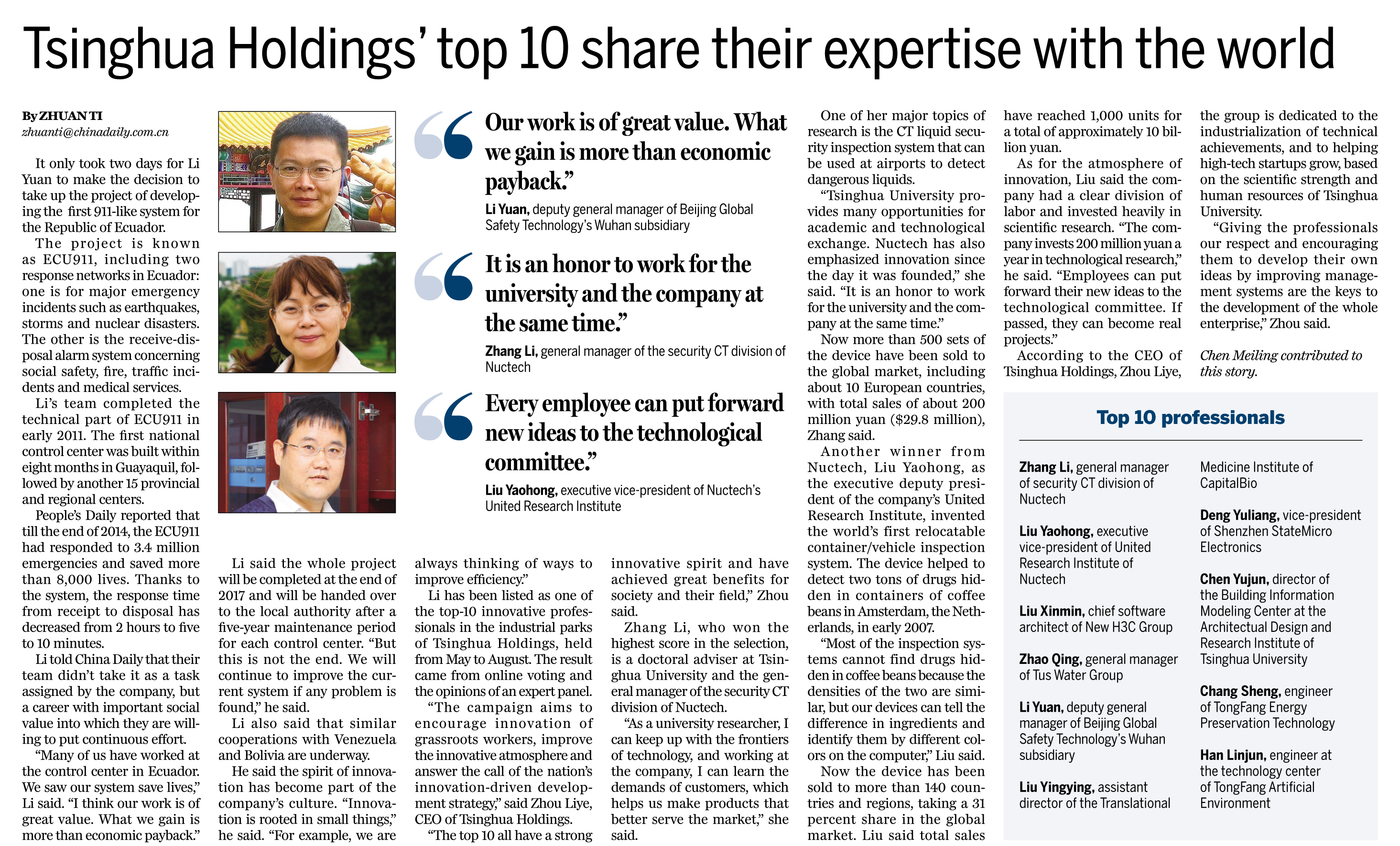