As the trend of global economic integration is irresistible China and Latin America need to cooperate together to realize their potential for shared high-tech industrial development, said Xu Jinghong, chairman of Tsinghua Holdings Co Ltd, a tech conglomerate backed by Tsinghua University.

Xu made the remarks while taking part in the Asia-Pacific Economic Cooperation CEO Summit held in Lima, capital of Peru, on Nov 18, as a representative of Chinese entrepreneurs. 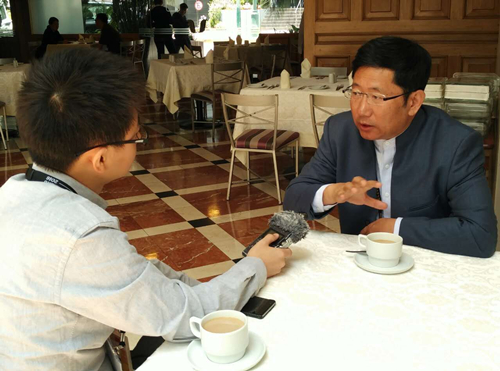 “The cooperation and development in the economic field between China and Latin America has been strongly boosted as Latin America enjoys relatively stable political environments and needs transformation of its economic development modes. In addition, China has laid a good foundation in the high-tech industry over the years,” said Xu, adding that Tsinghua Holdings has established closer high-tech cooperation with Latin American countries.

The ECU911 emergency monitoring system in Ecuador, which has earned high praise for its efficiency in helping coordinate rescue work, was designed and constructed by Beijing Global Safety Technology Co Ltd, an affiliate of Tsinghua Holdings.

It played a key role in handling emergency needs via 16 command and control centers covering the entire country after a 7.8-magnitude earthquake hit the northern Pacific coast of Ecuador on April 16, 2016.

In addition, since the launch of ECU911, Ecuador, which had been denounced for poor public security before 2010, improved from 16th to 4th place among Latin American countries in public security ratings by 2014. The country's crime rate was cut by nearly 30 percent, said Wang Yulin, China’s Ambassador to Ecuador in an interview.

Nuctech Company Limited, another Tsinghua Holdings’ subsidiary and an advanced security and inspection solution and service supplier, has long been expanding its business in Latin America.

It supplied nearly 260 security inspection devices for the venues and Olympic village during the Rio Olympics in Brazil this year.

Through 13 years of effort the company has sold its products in 23 Latin American countries, including Argentina, Brazil, Ecuador, Peru, and Chile. It also has five branches across Latin America in which more than half the workers are local.

Nuctech has taken part in security inspection work for many major events in Latin America, including the 2007 Pan American Games, the 2014 FIFA World Cup, the 2015 Panama summit of the Americas, and the 2016 Rio Olympic Games.

To enter local markets the company employs and trains community workers to contribute to local economic transformation and development.

To date, Tsinghua Holdings has discussed establishing funds and building incubators with Latin American enterprises, and both sides can expect broader cooperation in various fields, he added.