Rain Classroom 4.4, which allows teachers and students to access microphones and cameras at the same time with real-time online interactive functions, was released on Dec 10.

The new version was officially launched in the Lotus Pond Rain Classroom on Dec 16. All teachers and students can conduct mutual interactions and face-to-face communications through the platform.

Rain Classroom 4.4 is a new version developed for current integrated teaching. Compared with interactive teaching by webcast, it adds functions such as access to student audio and video and reduction in live broadcast delays.

After four months of R&D and testing, the new version has achieved the goal of students "appearing on the camera with instant access to microphone" and "zero delay" of broadcasting. Teachers can turn on the real-time interactive function after opening the rain class. Students will receive an interactive prompt on their mobile phones and can access their own video and voice channels after clicking.

Students now can join in real-time interaction through the Classroom’s WeChat Mini Program, and the web version will be launched later.

"In the future, you won’t need to use the rain classroom and conference software at the same time," said Yu Xinjie, a professor of the Department of Electrical Engineering of Tsinghua University, "I believe that getting rid of the constraints of multiple software, teachers and students can allow more focus on learning itself." 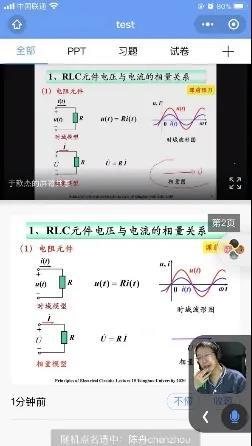 Screenshots of the real-time interactive function of Rain Classroom 4.4 [Photo/thholding.com.cn]

During the prevention and control of the pandemic, Tsinghua University used the online classroom teaching technology platform of Rain Classroom as the main platform, and carried out online teaching in combination with the massive online open courses (MOOC).

In order to meet the teaching needs of teachers and students, the Rain Classroom has launched functions such as live screen recording, playback downloads, online examinations, and online proctoring in the spring semester.

Teachers have used the Classroom more than 42,771 times, and had more than 2.1 million interactions such as answering questions, bullet screens and submissions, which not only enlivened the classroom atmosphere, but also provided a bridge for communication between teachers and students.

In addition, the number of users of the Classroom has exceeded 43 million, and more than 1,100 colleges and universities have provided resources on a large scale, adding to technical platform support for the digital transformation of higher education.